On Tuesday, May 14, the local authorities of Mexico City activated a contingency plan after five days with high levels of contamination, as a result of the forest fires that occur in the Aztec country. Air quality has been affected by high levels of ozone and the presence of PM 2.5 particles.

According to El País, not only Mexico City has been affected by poor air quality. Neighboring cities such as Pachuca and Puebla also face environmental emergencies. In both cases, it is the first time environmental contingencies have been decreed due to contamination.

The situation is complex and highly worrying, since on Tuesday there were 130 fires in 20 states, according to EFE. The states with the largest number of fires are Jalisco, Michoacán, Guerrero, Oaxaca, Chiapas and the State of Mexico. There are claims also in Mexico City itself. Although this is not the first time that Mexico has faced such situations, the current emergency and the climatic conditions are similar to those of 2016, the worst year for air.

This is why the government has been widely criticized for not having implemented the contingency plan beforehand. Carlos Samayoa, of Greenpeace Mexico, has stated that the laws in this regard are very lax. The environmentalist said, in statements to El País, that "it is a failure, the measures should be much more rigid" since these do not comply with what the WHO establishes.

An image revealed by NASA shows the tragic situation. In it, you can see a large number of conflagrations that seem to consume the Aztec country.

#NASAWorldview Image of the Week: Fires in Southern Mexico, as observed by the NASA Aqua MODIS instrument on 5/12/19. https://t.co/p8ph0e4gdx Interact with image using Worldview: https://t.co/3S1Wi8xJK6 pic.twitter.com/goVFjkoY5k 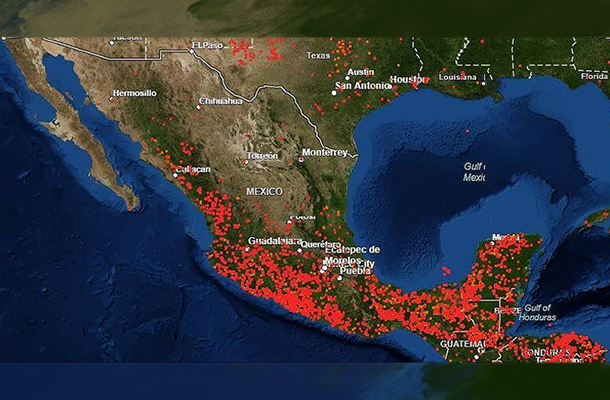 April and May are the months in which the conditions for forest fires intensify "due to the heat, the dry season, the scarcity of humidity in the environment and the high concentrations of dry plant material. Added to this is human action", according to NatGeo. In fact, the National Forestry Commission is sure that 99% of fires are caused by humans due to activities such as agriculture.

To try to counteract poor air quality, it has been arranged that vehicle traffic will be limited. This includes vehicles that transport construction materials without the necessary protection and gasoline cars. Local authorities have recommended not to carry out outdoor activities and for groups of vulnerable people, it is advisable to stay in homes with closed doors and windows.

The measures will be adjusted as the situation progresses, whether the fires can be contained or increased. Public opinion has questioned the capacity of the local government to solve the crisis.