"My family lives in southern China, in Guangzhou, the second city with the most virus-infected coronavirus," says Xiuhui sadly, a 33-year-old Chinese woman currently residing in the capital.

Xiuhui is a bright young woman, she is an adventure lover who first came to Bogotá in October 2019 to be part of the student community of the University of La Sabana. Her boss, a Colombian businessman with her own company in China, brought her to Bogotá to learn Spanish and thus be able to communicate with Spanish-speaking clients. With only four months here, Xiuhui is already able to communicate fluently.

In her plans, she was returning to China soon and continuing to work there, not only in Mandarin and English but also in Spanish. However, after the news of the coronavirus invaded the headlines of national and international media, it is uncertain for Xiuhui when she will be able to return.

LatinAmerican Post met with the foreigner to learn about the work of the Chinese community in Bogotá regarding the virus and its perspective on this issue.

LatinAmerican Post: The virus exploded in the lunar new year (January 25), the week in which there are more displacements of Chinese around the world, how did this affect your celebration?

Xiuhui Mao: Because of the virus we couldn't celebrate the new year, it was very difficult for us, especially for my family that is there. In my case, I met with my Chinese friends here in Bogotá and we cooked and dined together. However, we were sad about the news.

LP: You told me earlier that your family is in Guangzhou, but you also have friends in Wuhan, the most affected area, what have they told you about quarantine?

XM: The situation is very difficult for them. One of my friends in Wuhan lives with his whole family there. They can't leave home so they spend most of their time bored. In fact, he was going to return to Bogotá in February, but after everything that happened, I don't know when I can see him again.

LP: Can the Chinese in Bogotá return to their country?

XM: No, not at this time. However, doctors in China are saying that in a month the situation will improve significantly. Especially, because they are building two hospitals in Wuhan solely for those infected.

LP: I read that these hospitals are planned to be built in a week, but it is not the first time that China has managed to finish such a large work in such a short time, right?

XM: Yes, in 2003, the time of severe acute respiratory syndrome (SRAG), a hospital was built in Beijing in 7 days, and one of the hospitals currently being built in China, already in 2 or 3 days, will be Finished and worked.

LP: When the SRAG happened, if you were in China, how was that experience?

XM: That was in 2003. At that time I was 16 years old and I was in school. We could not get out of there. I stayed more or less 2 or 3 months in school. But it was fine because with my classmates we studied every day. Regarding my family, they could not leave home.

LP: Did you also sleep at school?

XM: Yes, I lived in school during the quarantine.

LP: How is the Chinese community in Bogotá taking the news?

XM: We rely on each other. For example, we collect money together to buy some medical things. Especially, mask to send to China.

LP: Does the Embassy of the People's Republic of China in Colombia provide any kind of support?

XM: Yes, Ambassador Lan Hu, sent an official statement to all the Chinese in Bogotá recommending that we not travel to China. Similarly, the Chinese are asked not to travel to other countries. 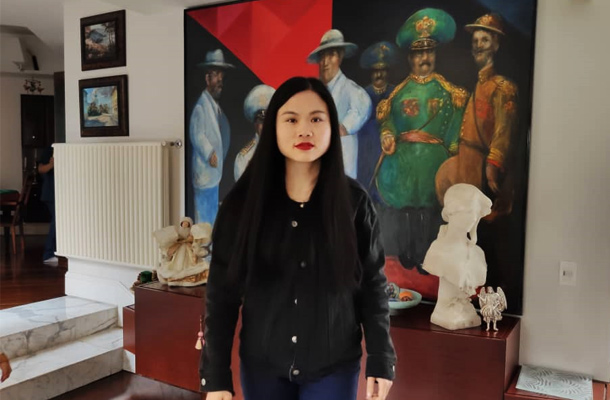 LP: Despite the quarantine, people may occasionally go out to market, right? Can the Chinese consume any kind of animal considering that it is suspected that the virus was originally transmitted from animal to human?

XM: Yes they can. People can leave their homes to the supermarket and buy whatever they want to cook.

LP: Regarding the origin of the virus, they are saying that it comes from bats ...

XM: They have not yet confirmed the origin of the virus. Although they said that it is very possible that it is because of the bats since they bring with them more than 170 viruses. But with the coronavirus they are not sure, it is not yet known for sure what originated it.

LP: And the seafood market?

XM: They have also been investigating that place and have found more than 300 viruses from different animals, but it is not yet known for sure which animal it comes from.

LP: What does your family say about the virus?

XM: My family, especially my parents are worried. They want this virus to disappear soon. But they are glad that I am here because I am more confident.

LP: Do you know anyone in China who is infected?

XM: I don't know anyone.

LP: Do you think the Chinese government is handling the situation well?

LP: Do you already have medicines to fight the virus?

XM: They discovered 3 medicines (Remdesivir, GS-5734; Chloroquine Sigma-C6628 and Ritonavir) that can cure the coronavirus. One of them also cures HIV.

XM: No ... only for people who already have the virus, medicine, and the hospital are free.

LP: Many Chinese people around the world who don't have the virus have suffered from discrimination. Has something like this happened to you in Bogotá?

XM: No. In fact, I think you are very calm and even very kind to us. Actually, I don't think this virus is going to happen in Colombia because it is improving in China and we also have medicine for this.