If most of the Constitutions of Latin American countries formerly explicitly prohibited the extradition of nationals and changes were made based on a historical circumstance relating to drug trafficking, it may be time to contemplate returning to our judicial roots regarding this matter

A worker cleans up outside the Legislative Council, a day after protesters broke into the building in Hong Kong. Reuters.

Hong Kong protesters stormed the Legislative Council this past Monday on the anniversary of the city's 1997 return to Chinese rule. A relatively small group of people, mostly students wearing hard hats and masks, took apart metal structures on the outside of the building and some actually entered the legislature. The main issue behind the protests is widespread anger over laws that would allow extraditions to China.

Independently of the violence, which the LatinAmerican Post does not excuse, the issue of extradition and the intellectual fight of people of Hong Kong to have a say in this matter should be followed closely by Latin American countries. The reason is that, in essence, our countries do not favor extradition but have been forced to adopt it aggressively by global circumstances regarding drug trafficking and that, since those particular situations have been changing, it may be time to reconsider the application of our traditional judicial philosophy regarding this matter.

Artur de Brito Gueiros Souza, a Federal Circuit Prosecutor and Professor of Criminal Law at UERJ and UNESA in Brazil, recently wrote that, in general, Latin American countries do not allow for the extradition of nationals. "Based on the non-handing over of nationals, their governments have established rules for the extraterritorial application of their criminal laws, thereby allowing their Public Prosecutor's Offices to commence a criminal persecution based on the same facts contained in the original request, as a consequence of the maximum application of international law", the Prosecutor added.

Also read: Demonstrations in Hong Kong in favor of maintaining its political independence

This is the point. Independently of whether or not one agrees with extradition, Hong Kong protesters are making the point that it should be an internal decision rather than an internationally or circumstantially imposed one. They are also reminding us that a vital topic, such, as extradition, must be decided internally and democratically.

"During or government we have extradited 116 criminals to the U.S., eradicated more than 80,000 hectares of illicit crops and destroyed about 4,600 drug laboratories, reflecting a clear attitude to confront drug trafficking," Duque stated. 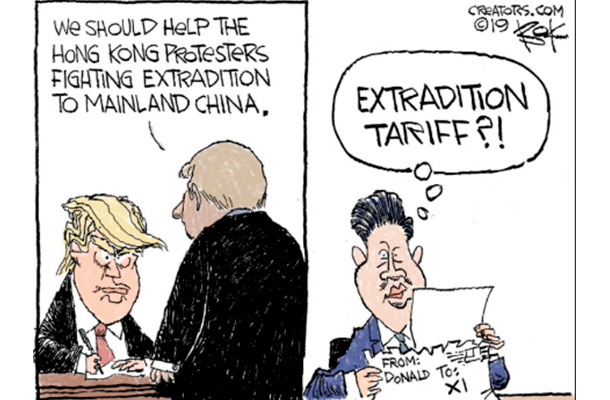 But, since when is the number of extraditions an indication of executive government success? In fact, extraditions have become such a key component of Colombia's law enforcement that the Colombian Cancilleria (the equivalent to the State Department in the U.S.) has published a "Practical Guide to Extraditions." Using the number of extraditions as a measure of success and having to create a practical guide for its use reflects, in our opinion, a severe degradation of this judicial tool so closely related to a nation's sovereignty.

As de Brito Gueiros Souza rightly points out, "what can be verified, therefore, on this topic, is that international drug trafficking caused South American countries, to a greater or lesser degree, to review their legal provisions associated with the non-extradition of nationals (whether native-born or naturalized). And this was done to promote a more effective fight against this type of crime and against the transnational criminal organizations that traffic drugs."

It is, therefore, the LatamPost's opinion that, if most of the Constitutions of Latin American countries formerly explicitly prohibited the extradition of nationals and changes have been made based on a historical circumstance relating to drug trafficking, it may be time to contemplate returning to our judicial roots regarding this matter. The circumstantial historical events that lead to the drastic changes regarding extradition are no longer present. Few would argue, for example, that Colombia remains under the threat of losing political control to drug lords. Therefore, the LatamPost believes that the people of Hong Kong are delivering the message that the topic needs to be revised and that this "memo" needs to be taken seriously.